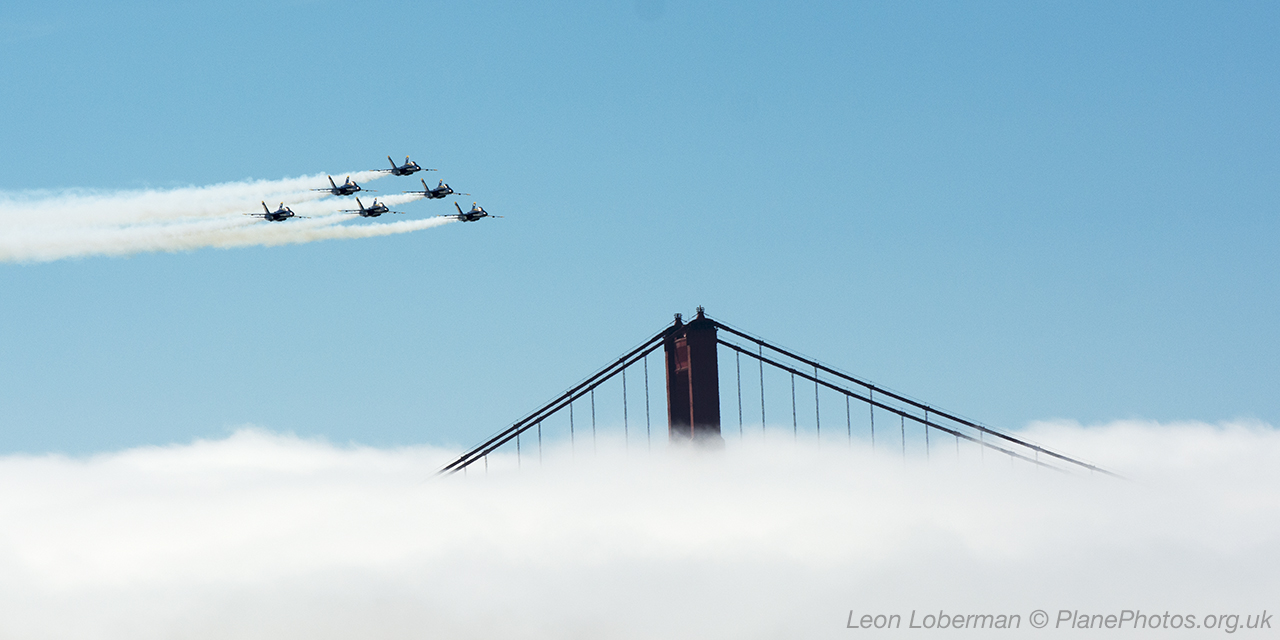 A long held ambition to see the airshow for San Francisco Fleet Week was finally fulfilled in October 2014. I had seen many images of the Blue Angels performing with the backdrop of the Golden Gate Bridge and Alcatraz Island and I wanted to experience it for myself.

Usually the US Navy send in one of the Pacific based carriers, with a contingent of aircraft on board. This year, however, it was decided to use the occasion to commission into service the latest America Class Amphibious Assault Ship USS America (LHA-6). As was the custom during Fleet Week, the ship was open for public tours and I was able to get on board on the Wednesday prior to the commissioning ceremony.

Normally the weather conditions in October in San Francisco are very conducive to airshows, with the infamous San Francisco fog having been long gone – not this year however! A freak heat wave in Northern California in the week leading up to the airshow weekend meant that the fog was to feature, in particular on the Friday and to a certain extent on the Saturday and Sunday. This meant a juggling of the schedule and also movement of airshow centre further into the Bay on the Friday.

I viewed the show from different positions on each of the days – on the Friday I was at Marina Green, which is where the airshow centre is supposed to be. On Saturday I moved slightly further east to Pier 2 in Fort Mason, where I met a few other aviation photographers. On the Sunday I had decided that I wanted to be out on the water, to give me what I thought would be the best possible vantage point and closest to the display line. I booked with Red and White cruises and was on board one of their boats which normally do sightseeing trips around the Bay.

The Sunday cruise started well, with the boat keeping station in the South-East corner of the display box for the first 45 minutes – however we then moved to the North-East corner. Whilst this gives great views of the city as a backdrop, it also means that the display box is not ‘into’ the sun, thus affecting image quality. Not many of the airshow performers passed North of the boat, so I was a little disappointed with the resulting photos. Fortunately Saturday’s location was a lot better in terms of keeping the sun behind me.

All in all it was a great experience – not much military hardware this year, following the cancellation in 2013 due to sequestration but a good mixture. It was particularly interesting to see the contribution by United Airlines, who are one of the sponsors if the airshow. They provided aerial demonstrations by a Boeing 757, Boeing 747 and Boeing 777 on the the 3 days.